Beit T'Shuvah Resident: "My Name is Nanette and I'm a Recovering Addict"
Sep 16 2016 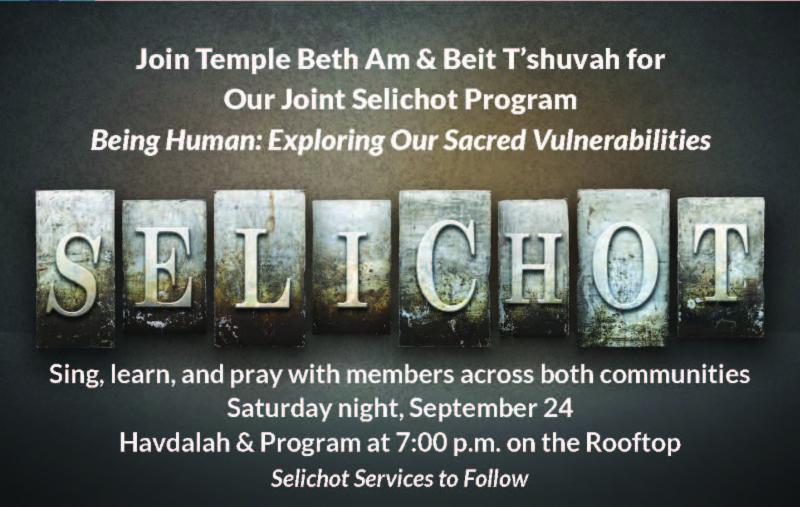 On 9/24 at 7pm, we'll be coming together in solidarity with the Beit T'Shuvah community here at TBA for Selichot. Nanette's story is an inspiring example of the power of T'Shuvah, transformation, and hope. Please join us to hear other stories!!

My name is Nanette and I'm a recovering addict. I began practicing addictive behaviors very early in life. I smoked marijuana, drank and took whatever pills I could find. I discovered my drug of choice, cocaine, at 18 years old.

During my early twenties I worked full time for a brokerage firm; completed Cosmetology school, became licensed and worked part-time in a beauty salon. I was engaged, we had a new car, a van, a motorcycle and a condominium in Huntington Beach. My fiance and I had a nice life. For a very long time my addiction was "functioning". But at 27 years old my fiance and I both began to use cocaine heavily. I became so immersed in my addiction that my life was completely out of control. Ultimately, my fiance and I split, I lost the condo, the car, the van, the motorcycle and our jobs. I chased my drug of choice and made some very bad decisions that led me to spending 28 years of my life in a guarded, gated community.

I am now starting my life over at Beit T'Shuvah. It was a long journey getting here but it was the best decision I could have made. Essentially, while I was a resident of that gated community I saw the production of Freedom Song. That was over five years ago and it ultimately brought me to Beit T'Shuvah's doorsteps. The play's message resonated so loudly within me and changed my life in such a way that I simply had to start my life over here. I began to pursue acceptance into the program - and just like I pursued drugs - I went to any lengths to get here.

The Rabbi at B'not Or, the synagogue behind the gates, built a Jewish Community with many volunteers who came to events "inside". Carrie Newman, Rachel Ehrman, and Janet Markowitz from the Beit T'Shuvah Alternative Sentencing Department came to the facility twice a year, for Pesach Seder and Simchat Torah. Upon meeting these three amazing women I began exchanging letters with them and I communicated with Rachel for quite some time. She had me write extensively about my life - my past, my drug use, my crime, and my recovery. After about a year of communicating with Alternative Sentencing I was accepted into Beit T'Shuvah. My name was placed on a waiting list because I did not know when I would be coming home. In November 2015 I was finally found suitable by California's Board of Prison Terms. I immediately contacted Carrie and Janet to tell them to prepare for my arrival. After five long months awaiting Governor Brown's approval, I paroled on April 19th of this year. I arrived at Beit T'Shuvah on the 21st - one day before Passover.

I don't believe it's ironic that I arrived during Passover. I was my destiny to trudge through the desert and to freedom during the time our ancestors made that journey 4,000 years ago.

Since becoming a grateful member of Beit T'Shuvah I am engaging in the community here and reclaiming my life. I am doing the next right thing by honoring my own dignity, the dignity of my peers, my family, and my community. I participate in Work Therapy through the Mind and Body Program and the Social Justice Program. I use my voice to advocate for the voiceless. I am going back to college to complete my certification as a drug and alcohol counselor, helping those who share my struggle. And I am a member of the Beit T'Shuvah Choir and joined the cast of Freedom Song, the very thing that led me to Beit T'Shuvah and ultimately my own freedom.

Beit T'Shuvah offers me hope, provides opportunities to grow and is my home. My therapeutic team guides and encourages me. In return, I live my life in such a way that I give back to the community that saved my life.

I am a grateful member of the Beit T'Shuvah family!