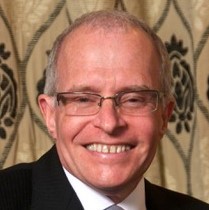 Jerry Krautman has been a member of Temple Beth Am since 1995. His wife, Jackie Weiss, who is originally from England, became a member after they got married in 2011. They met online while she was living in England, and they dated over skype. You will always find them in the front row of Library Minyan services.

Jerry is originally from Denver, Colorado. For his undergrad, he went to the University of Northern Colorado and got his degree in Communications Journalism, and then started working for non-profits and never stopped. He had been inspired by some speakers during his undergraduate and got very active in causes to get Russian Jews out of the Soviet Union and defending Israel on campus. "That was the 70's! We were all into that in the 70's."

He moved to Los Angeles in 1988 to attend the University of Judaism (now American Jewish University) and got a graduate degree in Non-profit Management with an emphasis on Jewish Communal Service. Beth Am was the place to go! Having grown up in more traditional community, he loved the fact he could practice Judaism fully and be proud of the way he practiced without judgement.

Jerry has much experience with leadership. He was previously the Executive Director at both Adat Shalom and University Synagogue, and the Director of Development at Adat Ariel. He is currently the director of Development for Judaic Sacred Music Foundation and the Association of Jewish Libraries. Jerry became the Library Minyan's Rosh starting on Tu'Bishvat. Through his leadership, he is looking forward to the Library Minyan's growth and gaining more participants.

In conclusion, here are some fun facts about Jerry: His favorite color is blue, he plays the drums, enjoys dancing, can speak Klingon, and loves the Denver broncos and Macintosh computers. He also loves to greet before Shabbat services (when he remembers).