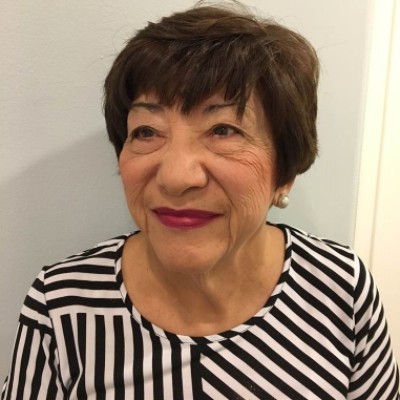 I was born in La Paz, Bolivia, in 1942. My parents, z"l, were German Jewish refugees who found a haven there beginning in 1938 and 1939. Although my father's father had been murdered in Buchenwald in 1938, my father's mother and maternal grandparents were, in 1940, among the last refugees able to escape the Nazis, and. they joined my parents in Bolivia. My father, a highly educated and resourceful man, found work for the American Consulate in La Paz, translating legal documents. A friend whom he met at work helped him get the necessary documents to immigrate to the USA in 1945.

When I was three years old, my maternal grandparents, parents, I, and a little dog my grandmother had smuggled all the way from Bolivia, arrived in Los Angeles, (the Customs officers where none too pleased when the dog jumped out of the basket!) . We all lived together in a rebuilt garage in the McArthur Park neighborhood, then moved to Hollywood. I attended Hollywood High, then UCLA. Elie, my "beshert" and I married in January 1960. He had come from Israel to study physics, had graduated UCLA and then received his Master's of Physics from USC. Our son Dan (now 55) was born in October 1961 in the old Cedars Hospital on Vermont. We moved to UC Riverside in '62 for Elie to do additional graduate work, and I received my bachelor's degree in Political Science there in 1963. We then moved to Seattle for five years, where Elie earned his PhD. In Physics and I received a Master's in Social Work I also worked for two years prior to graduate school at Dept. of Social Service, and after I earned my degree, at Jewish Family Service.

Our peregrinations continued: 2 years in Boston, where I worked at Boston Children's Service and Elie pursued a postdoctoral fellowship at MIT; then on to Israel for five years, where Elie worked teaching physics at Bar Ilan University. Our two daughters, Michal and Tamar, were born at Sheba Hospital (then Tel Hashomer). While in Israel, I studied Hebrew in ulpan, worked at the psychiatric ward at Sheba Hospital (then Tel Hashomer) and taught group social work at Bar Ilan University. In 1975, Elie was offered a job at UCLA, and our family returned to Los Angeles, living near my family. I worked at Jewish Family Service in WLA. After a year we started investing in real estate and eventually left our prior professions to start EGL Properties, a Property Management firm.

Elie and I joined Temple Beth Am about twenty years ago. We'd been members of another synagogue, but we were looking for a stronger, more caring, community. We knew Rabbi Rembaum and Fredi since our kids were in Akiba together. When Rabbi Rembaum smiled and waved to us from the Bimah when we came to attend a Bar Mitzvah at TBA, it was a sign that TBA would be our spiritual home.

As long as we've been members, we've been actively involved with Temple Beth Am. We joined our wonderful Havurah, the Yedidim, soon after becoming TBA members, and the Yedidim are still going strong today. I was Sisterhood president for four years, and a few years ago, Elie and I were very proud to receive Sisterhood's Chay'ey Olam award. I co-founded the Sisterhood's Mystery Book Club, and I am currently serving on the synagogue board. One of the things I'm most proud of is urging master teacher Marlynn Dorff , after she retired from Pressman, to teach a class in Biblical Hebrew for Sisterhood at Beth Am. Recently, Elie and I also joined BAIT Sefer, a TBA leaders' learning group. For pastimes, we love to play with our dog, travel, read, Elie is learning the flute, watch Netflix (me) and travel.

We have 6 grandchildren from the ages of 6 to 20, and I am glad to say that 4 are graduates or current students of Pressman Academy. Our two children who live in LA are TBA members, and three granddaughters have been bat Mitzvahed at Beth Am. My eldest granddaughter, who is now a sophomore at University of Massachusetts at Amherst, says it was her Jewish day school education that enabled her to combat any anti-Israel expression she has encountered on campus. Tamar and her husband live in Encino with their two children, and belong to Temple Judea.

We daven at BAIT Tefillah, and we love that it's so intimate and participatory. Elie frequently reads Haftarah at BAIT. I have experienced the caring of the Beth Am community first hand. When I was very sick or in a time of mourning, the community has stepped up to support me. I believe that my recovery from illness can be attributed at least in great part to the community's prayers and support.

Elie and I are grateful to the Beth Am community for all it has done for us, and hope to remain active and supportive members of the Shul for many years.