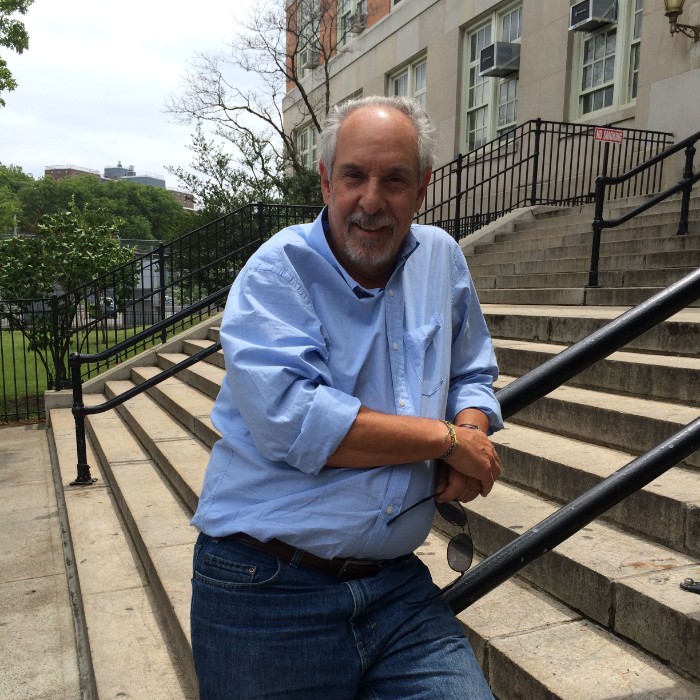 As with many journeys from Brooklyn to Hollywood, there's a story.

Dr. Michael Berlin had assumed while growing up in Bensonhurst, Brooklyn that everyone in the world was Jewish, Irish, or Italian. While walking home from Hebrew school during Hanukkah or Christmas time, he would see windows filled with either menorahs or Christmas trees all along the block. As a young boy, Michael felt surrounded by Jews and the feeling of Jewishness. He had the kosher deli and the appetizing store, where he could buy pickles from the barrel for 5 cents each. He'd buy Wise potato chips and cover the outside of the bag with deli mustard to dip the chips in. There was sturgeon and whitefish, and the local Jewish bakery and candy store. He felt very comfortable and safe, and that being Jewish was a part of the fabric of the neighborhood. It was only years later that he came to realize how segregated his predominantly white neighborhood was (and isn't proud of it).

If you were to ask young Michael what he wanted to be when he grew up, he would list three things: 1) a garbage man 2) a third baseman for the NY Yankees 3) an usher at a movie theatre.

Michael wanted to be a garbage man so he could ride all around the city on the back of a truck. But even more than that, he wanted to be a third baseman for the Yankees because of his great love of sports. Like many city kids in NY, he grew up playing sports, mostly basketball in high school and college; in the schoolyard on the weekends throughout the year. It was easy to develop a love of sports if you grew up in NY in the 1950s, especially with three baseball teams (Yankees, Dodgers, and Giants) and all that went on in Old Madison Square Garden, where Michael's high school team lost the Brooklyn PSAL championship on a last second shot to Wingate High School... but who holds a grudge?!

Michael played sports until he was 21 years old and started graduate school. His academic career took him through CCNY, Columbia, Hunter College School of Social Work and Yeshiva University's Ferkauf School where he got his PhD in Social and Organizational Psychology. It wouldn't be until 10 years later that he would pick up a basketball again. It was TBA's luck that Michael picked up a softball and bat again and has pitched TBA's illustrious synagogue softball team to ten championship games and he has helped bring four championships to the temple, including pitching one of those final games with a broken toe.

Michael first got inspired to go into Psychology when he went to see an exhibit on the renowned psychologist, BF Skinner. He was blown away by how one could understand what people were thinking and feeling. Michael's PhD led him on a varied and amazing career path. He worked as the Chief Psychologist in a 400-bed nursing home and health-related facility for 10 years and also at Montefiore Hospital, which had the very first Hospice program in the nation. He headed up the Death and Dying Resource Team for New York City under Mayor Ed Koch. He worked in drug rehab for the AWARE program and was also a Psychology Professor at Ramapo College. Michael started out as an elementary school teacher in Bedford-Stuyvesant and then went to work as a psychologist at Rikers Island Prison.

While Michael loved psychology, his first real love (with the exception of his amazing wife and fellow psychologist, Karen Kass) was the movies. Michael's great love for film and his desire to be an usher at a movie theatre started in elementary school when he would walk home past the movie theatre around the corner from his house. Every day he would circle the ticket booth and study the movie posters and black and white photos of upcoming films, and smell the popcorn from the lobby's open door. It made him feel like he was actually in the theatre. He saw West Side Story 14 Saturdays in a row when it played the Marboro Theater.

Michael and Karen left NYC in 1979 to move to Los Angeles for him to pursue an opportunity with Warner Brothers. However, timing is everything, and things came to an abrupt halt as soon as they got here. Warner Brothers started promoting Superman and left him waiting for that return call that never came. Here they were in a new city, unemployed, and "he was the only person in the unemployment line with a PhD and all his teeth."

Not too long after, Michael became the Dean of the College of Center for Early Education, (later the College for Developmental Studies) the smallest fully accredited senior college in the United States. Michael wondered how he got back into Education, which he had supposedly left back in NYC. However, with his talent, perseverance and luck, Michael found his way into Hollywood.

Michael has written, produced, or consulted on more than one hundred and twenty television episodes. His feature films include Anguish, winner of six European Film Awards, Breaking Point for Paramount and Republic Pictures and the Robo-Warrior series for Paramount Pictures. Some of Michael's TV credits include Miami Vice, Murder She Wrote, Cagney and Lacey (their episode about breast cancer and illegal toxic dumping, 'Waste Deep,' won the show the Emmy for Best Drama of the Year), MacGyver, Hercules, Diagnosis Murder, Flipper, Outer Limits (got them the Cable Ace Award for Best Drama). He's written two musicals, "Boulevard of Dreams," which had Patti LaBelle attached to play the lead but 9-11 happened 4 days before their New York tryouts for the Nederlander Group. He's got another musical that's ready to go as soon as the pandemic ends, "Love Don't Need a Reason." He is the founder of the Jewish Film Festival of Orange County, which just completed 32 years. He is a Professor Emeritus of Film and Television at California State University, Long Beach.

Here at TBA we've had a Film series for the past several years where we've screened one film a month, ate movie snacks, and had the opening and post-film discussion led by Michael. This past October, Michael finished his book "Starring Who?" (Nine decades of iconic movie roles and who turned them down.) In Mid-March, our final screening of the season was supposed to take place, but the world suddenly changed for all of us. Instead, it took place over Zoom, and TBA's Film Group has been meeting every Sunday ever since. We've watched and discussed 16 films ranging from Goodbye Columbus to Dirty Dancing, School Ties and Marjorie Morningstar to Ordinary People, Crossing Delancey, Good Night, and Good Luck and Quiz Show.

It has been such a blessing to have Michael and his wonderful partner, Karen Kass, be so engaged as lay leaders in the community. From the film series, to leading volunteers and the raffle drawing at our annual Thanksgiving lunch for seniors, to being involved in the membership committee and more. They do it all! So much love and gratitude to them both.