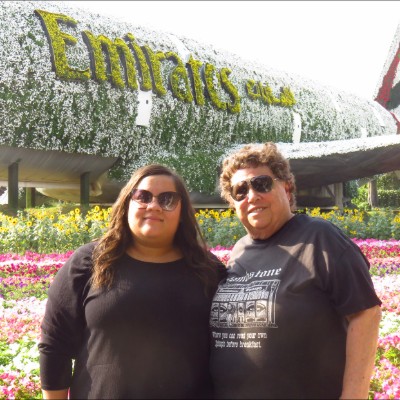 Barbara Breger (also known as Dr. Barbara) is a 3rd generation San Franciscan. She has been in Los Angeles since the mid-80's, but will forever be proud of her roots.

Dr. Barbara grew up directly in the city (not the surrounding area) with her parents and two younger sisters, and belonged to the conservative synagogue, Beth Shalom. She found that the Jews in San Francisco were not very religious. She actually didn't even know that her friends in high school were Jewish, partly because she didn't go to school on the high holidays and didn't see who else didn't go. It wasn't until college, when she saw who joined the Jewish fraternities and sororities, that she found out who was Jewish.

Dr. Barbara's father was a physician (General Practitioner). She was close to her father and believes he influenced her decision to become an ophthalmologist. She doubted becoming a doctor only once when her sister Donna kicked in a glass door and blood got everywhere. She felt she didn't want to have to face all that blood-- but that feeling only lasted about a week.

Dr. Barbara went to UC Berkley for undergrad and UC San Francisco for medical school. She left for the east coast for internships and residencies, including at Sinai Hospital in NYC. When it came time to leave, she decided to move to Los Angeles because she preferred warmer weather and felt it would be more healthy to live on her own as an independent adult rather than move back in with her parents in San Francisco.

Barbara started attending Temple Beth Am when she began saying Kaddish for her father in 1985. Beth Am was most like the synagogue she was used to. She always liked Rabbi Jacob Pressman (z'l) because he really reminded her of her Rabbi in San Francisco, Rabbi Saul White. She also loved Cantor Samuel Kelemer's (z'l) voice.

Dr. Barbara had been trying to have children, and in the early 90's, a friend of hers recommended she adopt from Romania. Adoptions became easier there after the fall of the Communist government in 1989 and assassination of their dictator, Nicolae Ceausescu. When she first got the call in February from Romania to come and meet some children, and she hoped on a plane with a friend and got there four days later.

When the paperwork cleared and she flew back to Romania, she had at first some tensions with the flight crew about storing her luggage underneath the plane. When they found out she was there to adopt a child their attitude totally changed. They went above and beyond to help her. Shimonah had a fever and they got her into a doctor. She was going to have to sleep at the airport but they pulled some strings and helped her reserve a hotel room. On the flight back, they upgraded her seat from economy to first class, and a pilot sitting next helped look after Shimonah so Barbara could walk around the plane a bit. She'll never forget their kindness.

The adoption process began end of November of 1990 and was finalized in the beginning of June of 1991.

Dr. Barbara is very grateful to Temple Beth Am and the sense of community it's provided, and how it's given Shimonah a connection to her Judaism. She misses going to Temple Beth Am since Covid restrictions began. She's found the lack of in person connection distressing but has found much comfort in participating in Rabbi Kligfeld's online class, the virtual trip to the South and her sisterhood book class.