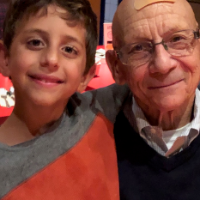 Bernie Goler's nickname is Memphis because he is from there and proud. Bernie gets excited meeting other Southerners out here in California, and especially when they are Memphian's!

Bernie was born there and grew up in an Orthodox Community, Baron Hirsch. However, there is currently about 10,000 Jews in Memphis.
Many communities were more culturally Jewish than religious. The reform and the Orthodox community have a stronger presence to this day. The conservative movement did not begin until the 1950's.

He was very involved in AZA through B'nai Brith and his chapter hosted debates, basketball, fundraisers and dances. A lot of Jewish life was centered around the Jewish Community Center. There were many youth groups. The reform Jews had a fraternity at one point but it was banned years ago because it was elitist.

His father was a chairman of the JCC athletic program. There were a lot opportunities to play basketball, softball and flag football. Although his dad coached the basketball team, Bernie didn't see himself as an athlete.

Bernie associates a lot of Memphis culture with 50s rock-and-roll and BBQ. Most non-Jews were Baptists who sort of respected the Jewish people. They liked to hang out with the Jews because they danced and the Southern Baptists did not.

There was very little inter-religious dating, almost none. Although if you had non-Jewish friends they would go to Bar and Bat Mitzvah's and that was not a threat.

After graduating from the University of Tennessee medical school, he went to St. Louis to do more training. He met his wife there, Bonnie, who was getting her masters in social work. Bernie joined the Navy during Vietnam, and moved to CA to serve in the hospital.

He bonded with two of the doctors also from the south. One who went to Auburn University and the other the University of Alabama. Football rivalry made it sort of a mixed marriage.

He and his wife lived in San Bernardino for 38 years where he practiced and really enjoyed it there. They decided to move to Los Angeles 11 years ago. They have 2 daughters and grandchildren here, and wanted to experience a different community. They are members of Temple Emanuel and associate members of Temple Beth Am. He also happens to be related to Temple member, Deborah Chariton.

Bernie goes back to Memphis about once a year and since his parents are gone and the rest of the family, he usually stays with classmates and windows of classmates. And couples they traveled with.

Bernie will always love his southern roots. He has joined us on our virtual Journey throughout the South and has really enjoyed it. He's even made the connections between TBA and the presenters. Even though he's already been to every location, he's enjoying the journey.

Click HERE for more info on the Virtual trip the South