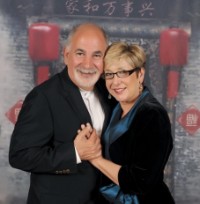 Avi: I was alienated from Judaism. Not because of my heritage, but because I was the classic disaffected Jew. I never went to Shul, except for on Yom Kippur for Neilah, when my parents were alive and only for them. I planned it so that I only had to spend a ½ hour at Shul, and I hated every minute of it. Part of the reason why I ended up with a non-Jewish woman is because it didn't matter to me in the least bit. And then after we get married, to all of the sudden have her say to me that she wanted to convert, was both threatening and intimidating. What did that mean for me? What did that mean for us? I grew up in a conservative and Kosher home, but as soon as I was 16 years old, I was done. Now all the sudden, here is my second wife, who wasn't Jewish, telling me she wants to convert to Judaism. I was against her converting, but Wanda told me that she was telling me what she was doing rather than asking for permission.

Wanda's parents were Christian. They regularly attended church, and were active in their church. Her father was also in the navy, and a Commander of submarines. Wanda's father (and mother) and I got along great and we enjoyed talking to each other, particularly about religion (while Wanda's mother and sisters cringed).

Wanda: I also think he loved talking to you because Jesus was Jewish.

Avi: When Wanda decided to convert, I was required to go to classes with her, and was not happy about that. But I started to go for her, and because Rabbi Neal Weinberg kind of guilted me into it. He basically said, you don't have to study, or do the homework. You just have to show up. What do you do on Wednesday nights anyway? And I said, well nothing, and I went. And then I started learning about Judaism from an adult's perspective and became more interested and involved.

When my mother died, I started going to Daily Minyan at the insistence of others in Emma's class who were going through the same 11-month process. Before I knew it, I was getting involved, and it was a powerful and amazing experience. I then started to go to the Library Minyan on Shabbat mornings. I loved the Library Minyan. I loved that it is lay led. My favorite saying is that at each service you have multiple opportunities for a train wreck. Wanda usually adds that it also means there are multiple opportunities for amazing experiences, and everything in between. She is, of course, correct.

Wanda and I are the types of people that get involved, whether we like it or not. But it's no doubt that Wanda pulled me back to get involved in Judaism, and to rediscover Judaism. It has become an incredible force in our lives.

Wanda: I know that I was called back into Judaism, and that I was Jewish in past lives. And for me to come back to it in this lifetime meant having to tell my parents that I'm choosing another religion that wasn't the one they raised me in, and making that statement and feeling so strongly about it. But I was avoiding the conversation. I told everybody except my parents, even my two young sons from my first marriage. Everyone knew I was converting – except my parents. I was so nervous. I said, how am I going to tell my dad?

Avi: That's not what you said. You said how are WE going to tell your dad.

Avi: I didn't want anything to do with it. I told her that's on you.

Wanda: So WE went out to dinner and WE told them. My dad said they weren't surprised. He felt this might be happening, and had already talked to their Pastor about it. The pastor's sister had married a Jewish guy. So I thought I was keeping this big secret, and he was already preparing himself.

As we were talking, my father pulled out a cocktail napkin and drew a circle on it, and said this is God. And then he drew all these concentric circles, and talked about how we're all trying to find our way back home. And that there are all these different religions and belief systems, but we all want to get back to God.

He said his pastor talked about how Judaism is a very family based religion, and he knows Avi is a UCLA alum (as was he), and that Avi was taking my sons (his grandsons) to the UCLA football games and basketball games, something that I never did. Avi's seats were on the opposite side of the Rose Bowl, but he always went over to my parents' side with my sons and visited. My father loved this.

There was none of this, you're going to hell, but rather, okay I get it.

Avi: And Wanda's oldest son is marrying a Jewish woman next May!

Wanda: She's Jewish!!!!! (kvelling) And she had a Bat Mitzvah led by Rabbi Daniel Pressman, Rabbi Jacob Pressman's son up in Saratoga. I had done an art piece that ended up in that shul. And as I'm describing it to her, she said, oh, you mean the pomegranate piece? The one with the seasons?

So my grandkids are going to be Jewish. And her mother was a Jew by choice in the 1960s, which wasn't common. It was very radical at the time.

Wanda: Unless you were rejecting your faith, and you were going to be like Philip Roth.

Avi: But you were often disowned, and that was the risk those people ran at that time.

Wanda: So my parents didn't disown me, and they loved Avi. Just before my father died, we all went to Puerto Vallarta on vacation. He knew his time was very close, and the 4 of us got to spend meaningful time together. And I knew he felt his daughter was in a very good place, and very grounded, and very loved, and that he now had a Jewish granddaughter, Emma (who he taught to dive off the side of the pool on that trip), and that all of this was okay! He died a month after we returned, about 12 years ago. My mother is alive and doing amazingly well, always sending us Jewish-themed cards at the holidays. We make sure she is never alone on Christmas, even going to Christmas Eve services with her. 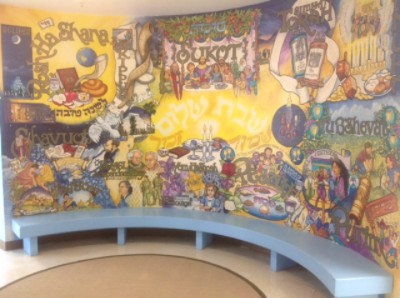 When Avi initially turned down the role of Executive VP at TBA, Wanda told him that he WAS going to take it on, and so he accepted. TBA has much gratitude for her little nudge!